The success of Steve Jobs is not only about his superb leadership skills and innovative technological designs. His impactful encounter with death actually played a huge role, helping him to listen to his heart which led him to creating one of the world’s leading technology company, Apple.

His quotes, especially those from his famous Stanford Commencement Speech (2005), can inspire and motivate us all to follow our heart, whatever our dreams may be. 3. “Again, you can’t connect the dots looking forward; you can only connect them looking backwards. So you have to trust that the dots will somehow connect in your future.” (Go to Steve Jobs Quotes on Life)

4. “Remembering that you are going to die is the best way I know to avoid the trap of thinking you have something to lose. You are already naked. There is no reason not to follow your heart.” (Go to Steve Jobs Quotes on Death) 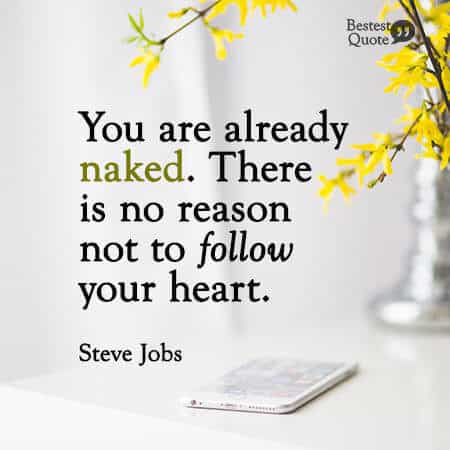 5. Remembering that I’ll be dead soon is the most important tool I’ve ever encountered to help me make the big choices in life. Steve Jobs Click To Tweet

6. “Because almost everything — all external expectations, all pride, all fear of embarrassment or failure – these things just fall away in the face of death, leaving only what is truly important.”

7. “I think death is the most wonderful invention of life. It purges the system of these old models that are obsolete.”

8. “Having lived through it, I can now say this to you with a bit more certainty than when death was a useful but purely intellectual concept: No one wants to die. Even people who want to go to heaven don’t want to die to get there. And yet death is the destination we all share. No one has ever escaped it. And that is as it should be, because Death is very likely the single best invention of Life. It is Life’s change agent. It clears out the old to make way for the new. Right now the new is you, but someday not too long from now, you will gradually become the old and be cleared away.”

9. If today were the last day of my life, would I want to do what I am about to do today? And whenever the answer has been 'No' for too many days in a row, I know I need to change something. Steve Jobs Click To Tweet

10. “Without death, there would be very little progress.”

11. “Ever since I’ve had cancer, I’ve been thinking about it more. And I find myself believing a bit more. I kind of – maybe it’s ’cause I want to believe in an afterlife. That when you die, it doesn’t just all disappear. The wisdom you’ve accumulated. Somehow it lives on, but sometimes I think it’s just like an on-off switch. Click and you’re gone. And that’s why I don’t like putting on-off switches on Apple devices.”

12. “You have to trust in something — your gut, destiny, life, karma, whatever. Because believing that the dots will connect down the road will give you the confidence to follow your heart even when it leads you off the well-worn path and that will make all the difference.” Steve Jobs 13. “And much of what I stumbled into by following my curiosity and intuition turned out to be priceless later on.”

14. “It was awful tasting medicine, but I guess the patient needed it.”

15. “Don’t let the noise of others’ opinions drown out your own inner voice. And most important, have the courage to follow your heart and intuition.”

16. Sometimes life is going to hit you in the head with a brick. Don’t lose faith. Steve Jobs Click To Tweet

17. “Have the courage to follow your heart and intuition. They somehow already know what you truly want to become. Everything else is secondary.”

18. “When you grow up you tend to get told that the world is the way it is and your life is just to live your life inside the world. Try not to bash into the walls too much. Try to have a nice family life, have fun, save a little money. That’s a very limited life.”

19. “Life can be much broader once you discover one simple fact: Everything around you that you call life was made up by people that were no smarter than you.” Steve Jobs’ advice to potential entrepreneurs, interview by the Silicon Valley Historical Association

20. “Let’s go invent tomorrow rather than worrying about what happened yesterday.”

21. “Your time is limited, so don’t waste it living someone else’s life. Don’t be trapped by dogma — which is living with the results of other people’s thinking.” Steve Jobs 22. “The minute that you understand that you can poke life and actually something will pop out the other side, that you can change it, you can mold it.”

23. “That’s maybe the most important thing. It’s to shake off this erroneous notion that life is there and you’re just gonna live in it, versus embrace it, change it, improve it, make your mark upon it. I think that’s very important and however you learn that, once you learn it, you’ll want to change life and make it better, cause it’s kind of messed up, in a lot of ways. Once you learn that, you’ll never be the same again.” Steve Jobs’ advice to potential entrepreneurs, interview by the Silicon Valley Historical Association

26. “I believe life is an intelligent thing, that things aren’t random.”

Related:  Quotes to Inspire You Living Life to the Fullest

27. “As with all matters of the heart, you’ll know when you find it.” Steve Jobs 28. “And, like any great relationship, it just gets better and better as the years roll on. So keep looking. Don’t settle.”

29. “I’m convinced that the only thing that kept me going was that I loved what I did. You’ve got to find what you love. And that is as true for work as it is for your lovers.

31. “That was one of the things that came out most clearly from this whole experience [with cancer]. I realized that I love my life. I really do. I’ve got the greatest family in the world, and I’ve got my work. And that’s pretty much all I do. I don’t socialize much or go to conferences. I love my family, and I love running Apple, and I love Pixar. And I get to do that. I’m very lucky.”

33. “People say you have to have a lot of passion for what you’re doing and it’s totally true. And the reason is because it’s so hard that if you don’t, any rational person would give up. It’s really hard. And you have to do it over a sustained period of time. So if you don’t love it, if you’re not having fun doing it, you don’t really love it, you’re going to give up.”

34. “That’s been one of my mantras – focus and simplicity”

35. “You have to be burning with an idea, or a problem, or a wrong that you want to right. If you’re not passionate enough from the start, you’ll never stick it out.”

36. “Your work is going to fill a large part of your life, and the only way to be truly satisfied is to do what you believe is great work. And the only way to do great work is to love what you do. If you haven’t found it yet, keep looking. And don’t settle.” Steve Jobs

37. “If you are willing to work hard and ask lots of questions, you can learn business pretty fast.”

38. “I didn’t see it then, but it turned out that getting fired from Apple was the best thing that could have ever happened to me.”

39. “The heaviness of being successful was replaced by the lightness of being a beginner again, less sure about everything. It freed me to enter one of the most creative periods of my life.”

40. “Be a yardstick of quality. Some people aren’t used to an environment where excellence is expected.”

41. “I don’t care about being right. I care about success and doing the right thing.” 43. “Details matter, it’s worth waiting to get it right.”

44. “My job is not to be easy on people. My job is to make them better.” 2008 Interview with Steve Jobs about the key to Apple’s success

45. “Simple can be harder than complex: You have to work hard to get your thinking clean to make it simple. But it’s worth it in the end because once you get there, you can move mountains.”

47. Being the richest man in the cemetery doesn’t matter to me. Going to bed at night saying we’ve done something wonderful… that’s what matters to me. Steve Jobs Click To Tweet

49. “Get closer than ever to your customers. So close that you tell them what they need well before they realize it themselves.”

50. “People who know what they’re talking about don’t need PowerPoint.”

51. “Innovation distinguishes between a leader and a follower.” Carmine Gallo (2001), The Innovation Secrets of Steve Jobs 54. “Sometimes when you innovate, you make mistakes. It is best to admit them quickly, and get on with improving your other innovations.”

55. “I would trade all of my technology for an afternoon with Socrates.”

58. “For you to sleep well at night, the aesthetic, the quality, has to be carried all the way through.”

59. “I think if you do something and it turns out pretty good, then you should go do something else wonderful, not dwell on it for too long. Just figure out what’s next.” NBC Interview about the opening of the Apple Store in Midtown Manhattan (2006) (https://www.nbcnews.com/id/wbna12974884#.U_xCSfmSxh4)

60. “The doers are the major thinkers. The people that really create the things that change this industry are both the thinker and doer in one person.”

61. Don’t get hung up on who owns the idea. Pick the best one, and let’s go. Steve Jobs Click To Tweet

62. “Don’t take it all too seriously. If you want to live your life in a creative way, as an artist, you have to not look back too much. You have to be willing to take whatever you’ve done and whoever you were and throw them away.”

55 Times Winnie-the-Pooh Was Spot On About Love, Life And Death

50+ Buddha’s Quotes on Love (to Help Center Your Heart)